Home › About us › The Pronalife principle › Technical implementation

In countries with low rainfall a seawater desalination plant is often the only way of providing people and agriculture with fresh water.

We design, produce and perform on-site installation of complete plants that are configured to suit the specific circumstances.
We can supply a variety of different systems, all of which are thoroughly tried-and-tested.

It comprises a shallow, black (PE, PC) pool of seawater with a layer of thermal insulation (e.g. sand) and a tent-shaped transparent cover made from window glass; as the seawater absorbs the solar radiation it evaporates. The water vapour then condenses on the inside surface of the wind-cooled cover. The condensate is channeled away in collecting channels for further conditioning (blend with saltwater). Simple solar distilleries based on this principle have been used for desalinating seawater ever since the end of the 19th century. In the case of plants close to the coastline any seawater (brine) left over following the evaporation process is pumped back into the sea. 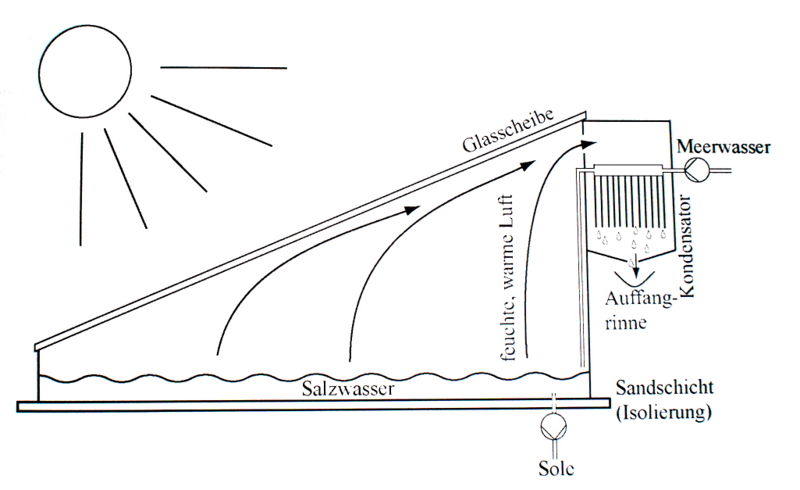 The production of distilled water increases progressively in line with the water temperature. The distillery should therefore be linked with a solar-thermal collector and the condensation heat of the water condensing in the collector should be used for heating up the saltwater in the distillery. Given a good level of solar radiation, a distillery linked with a collector yielded a production increase of 15% relative to a simple solar distillery for a plant surface area of 1 m² (distillery + collector). On the other hand, the far greater construction cost and greater running costs of a flat collector in comparison with a simple solar distillery must be taken into account. However, trials have shown that introducing heat into the saltwater pool (external heat source with a sufficiently high temperature, maybe waste heat) and the associated higher saltwater temperatures of above 80 °C can bring about production increases of more than 50 %.

The average output of drinking water from this kind of simple saltwater desalination plant based on the greenhouse principle is up to 6 l per m² per day in summer and around 1.2 l per m² in winter. This applies where annual insolation is between 1500 and 2000 kWh/m² (Mediterranean region) and the plant efficiency rating is around 40 %. These plants therefore take up a large amount of space if large amounts of water are to be produced. Based on a service life of 20 years and an interest rate of 8 %, the cost of producing drinking water this way is around 2.20 euros per m³.

Advantages: The plant is simple to construct. This means that it can also be constructed and maintained by the local population. The plant does not involve any pumps, and so does not require any electricity. It can therefore be installed out in the field and in regions with minimal infrastructure.

Disadvantages: Since the condensation takes place on the surface of the glass, the condensation energy cannot be recycled and used to prewarm the seawater. This is why the plant’s output is relatively low per m².

Pronalife is planning to expand its operation
by using solar-thermal steam power plants for desalinating seawater.
These not only produce valuable drinking water, but a connected steam turbine generates electrical power at the same time.
One source of information on this technology is: 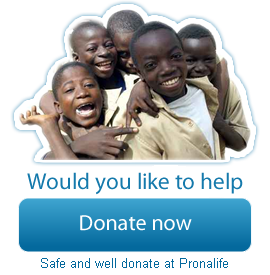 News
Quotes
If you are crazy enough to think you could change the world, you're already there.
Donations